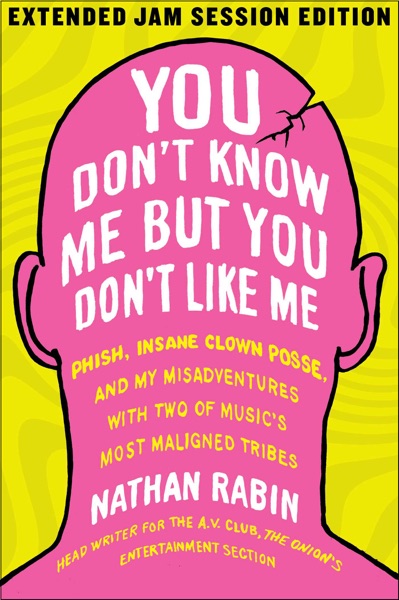 The ebook edition now includes Nathan Rabin’s “Extended Jam Session”—a two-part bonus chapter about what writing this book did to (and for) his life. The first part chronicles the author’s melancholy yet hilarious excursion on the maiden voyage of the Kid Rock Chillin’ the Most cruise, and the second part depicts the life lessons gleaned from getting sued by American Express over the charges the author racked up writing the book. The chapter sheds new light on a singular and unique exploration of personal and musical obsession and further highlights the book’s theme of transcendence through utter, abject failure.

When memoirist and former head writer for The A.V. Club Nathan Rabin first set out to write about obsessed music fans, he had no idea the journey would take him to the deepest recesses of both the pop culture universe and his own mind. For two very curious years, Rabin, who Mindy Kaling called “smart and funny” in The New Yorker, hit the road with two of music’s most well-established fanbases: Phish’s hippie fans and Insane Clown Posse’s notorious “Juggalos.” Musically or style-wise, these two groups could not be more different from each other, and Rabin, admittedly, was a cynic about both bands. But once he gets deep below the surface, past the caricatures and into the essence of their collective cultures, he discovers that both groups have tapped into the human need for community. Rabin also grapples with his own mental well-being—he discovers that he is bipolar—and his journey is both a prism for cultural analysis and a deeply personal exploration, equal parts humor and heart.