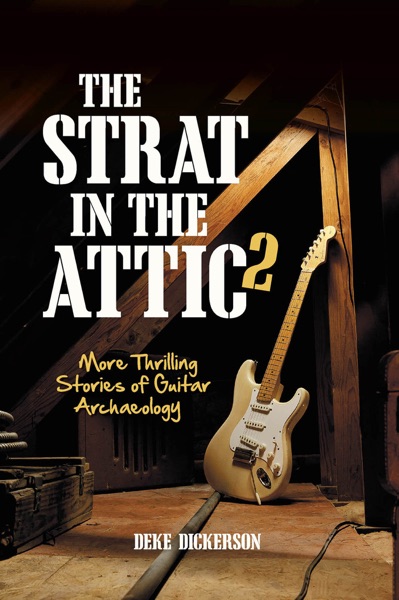 More astounding stories of rare guitar finds and the music legends who owned them.

Do you dream of finding a 1954 Stratocaster or 1952 Gibson Les Paul online, at a garage sale, or in the local penny saver? How about virtually rubbing elbows with one of your favorite rock legends? Following up his first-of-its-kind The Strat in the Attic, musician, journalist, and “guitarchaeologist” Deke Dickerson shares the stories behind dozens of more astounding finds including:

A rarer-than-hens-teeth 1966 Hallmark Swept-Wing that originally belonged to Robbie Krieger of the Doors, stashed away in an attic in Alaska for forty years!

A crazy-valuable 1958 Gibson Flying V belonging to a Chicago bluesman–who, it turns out, also happens to have an equally rare 1958 Gibson Explorer!

An out-of-the-blue, a “to whom it may concern” email leads the author to a trailer park in Salem, Oregon, where one of Bob Wills and the Texas Playboys’ original 1940’s Epiphone Emperor archtops is waiting to be purchased for a song!

Buddy Merrill, the amazingly talented guitarist from the Lawrence Welk show, gives his 1970 Micro-Frets Huntington to the author, but only if he “promises to PRACTICE.”

Photos of the guitars and other exciting memorabilia round out a package that no vintage-guitar aficionado will want to be without!