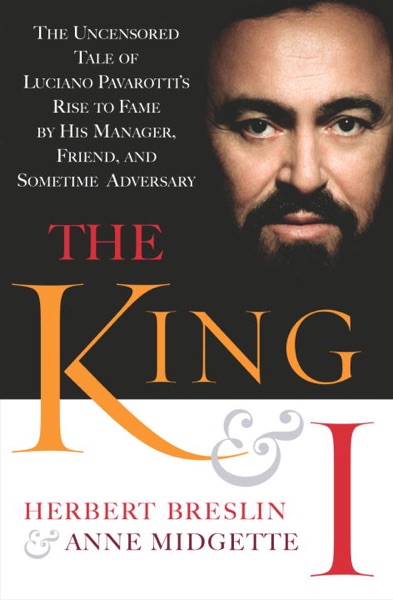 Luciano Pavarotti’s longtime manager and friend tells all. All.

The King and I is the story of the thirty-six-year-old business relationship between Luciano Pavarotti and his manager, Herbert Breslin, during which Breslin guided what he calls, justifiably, “the greatest career in classical music.” During that career, Breslin moved Pavarotti out of the opera house and onto the concert (and the world) stage and into the arms of a huge mass public. How he and Pavarotti changed the landscape of opera is one of the most significant and entertaining stories in the history of classical music, and Herbert Breslin relates the tale in a brash, candid, witty fashion that is often bitingly frank and profane. He also provides a portrait of his friend and client—“a beautiful, simple, lovely guy who turned into a very determined, aggressive, and somewhat unhappy superstar”—that is by turns affectionate and satirical and full of hilarious details and tales out of school, with Pavarotti emerging as something like the ultimate Italian male. The book is also enlivened by the voices of other players in the soap opera drama that was Pavarotti’s career, and they are no less uncensored than Herbert Breslin. The last word, in fact, comes from none other than Luciano Pavarotti himself!
The King and I is the ultimate backstage book about the greatest opera star of the past century—and it’s a delight to read as well.