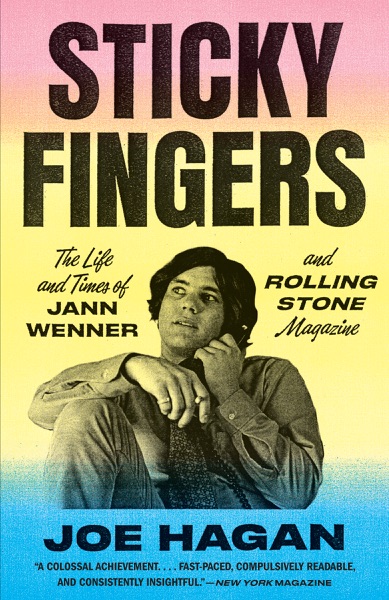 A delicious romp through the heyday of rock and roll and a revealing portrait of the man at the helm of the iconic magazine that made it all possible, with candid look backs at the era from Mick Jagger, Keith Richards, Elton John, Bono, Bruce Springsteen, Paul McCartney, and others.

The story of Jann Wenner, Rolling Stone‘s founder, editor, and publisher, and the pioneering era he helped curate, is told here for the first time in glittering, glorious detail. Joe Hagan provides readers with a backstage pass to storied concert venues and rock-star hotel rooms; he tells never before heard stories about the lives of rock stars and their handlers; he details the daring journalism (Tom Wolfe, Hunter S. Thompson, P.J. O’Rourke) and internecine office politics that accompanied the start-up; he animates the drug and sexual appetites of the era; and he reports on the politics of the last fifty years that were often chronicled in the pages of Rolling Stone magazine.

Supplemented by a cache of extraordinary documents and letters from Wenner’s personal archives, Sticky Fingers depicts an ambitious, mercurial, wide-eyed rock and roll fan of who exalts in youth and beauty and learns how to package it, marketing late sixties counterculture as a testament to the power of American youth. The result is a fascinating and complex portrait of man and era, and an irresistible biography of popular culture, celebrity, music, and politics in America.