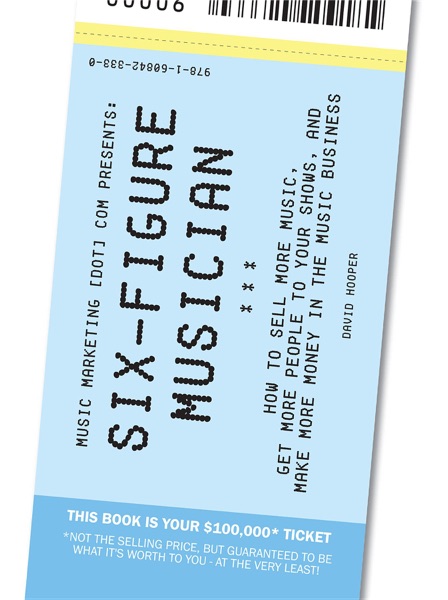 An Open Letter to Any Musician Who Wants to Make $100,000 (or More) in the Music Business

You're in a career where it's considered "normal" to be broke. If you were doing anything else for a living, you'd have given up by now.

And I'm sure there are people in your life who wish you'd do just that… They want you to settle down, get a "real" job, and make music a hobby.

Screw 'em. The truth is, if you know what to do, you can make a lot of money as a musician.

This book shows you what to do. You'll learn exactly how to make money with your music — in the club, on the Internet, and on the road.

Here's a taste of what's waiting for you…

– How to get record labels to approach you (instead of you chasing them)
– Nobody at your shows? I'll show you several ways to fix that…
– "The Drip Method" — The most profitable way to release music.
– A 100-year-old marketing trick developed by a woman thought to be "too fat and ugly" for a career in music — today it works better than ever!
– The greatest threat to your music business success (it's not piracy) and how to neutralize it.
– A songwriting secret from successful drag queens and pissed off karaoke singers so potent, it almost guarantees a great song!
– How a $10 "kitchen appliance" will make you a better songwriter
– 4 proven "cures" for music business burnout and overwhelm
– What it takes for a musician to make $150,000/year (with only 500 fans)
– Rules for social media. Ignore these at your own risk.
– "Superfan" Secrets – How to develop fans who buy everything you sell.
– How to sell lots of music… without being obnoxious or turning people off
– Are you a musician over 40? Why age doesn't matter anymore…
– Proven, word-for-word "scripts" and emails that get people to buy your music
– 8 ways to make money giving your music away for free
– A small change in the way you release new music that is so powerful, you will double the money you make.

And that's just for starters. There's a lot of money to be…