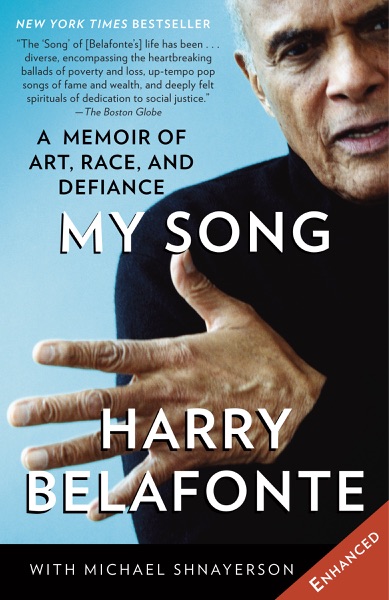 This deluxe eBook edition of Harry Belafonte’s remarkable memoir includes nearly eighteen minutes of original video—Mr. Belafonte talking about his first meeting with Martin Luther King, Jr. . . . his friendship with Sidney Poitier . . . the making of “We Are the World” . . . and much more—the bonus song “Jump in the Line” from the companion album Harry Belafonte—Sing Your Song: The Music; and the book’s photographs compiled as a slide show.

Harry Belafonte is not just one of the greatest entertainers of our time; he has led one of the great American lives of the twentieth and twenty-first centuries. Now, at last, this extraordinary icon tells us about it all—his poverty-ridden childhood in Harlem and Jamaica; his meteoric rise to become one of the world’s most popular singers, breaking down racial barriers that no one had broken before, achieving equal popularity with white and black audiences; his lifelong, passionate involvement at the heart of the civil rights movement and countless other political and social causes. Along the way he’s befriended many beloved and important figures in both entertainment and politics—Paul Robeson; Eleanor Roosevelt; Sidney Poitier; John F. Kennedy; Marlon Brando; Martin Luther King, Jr.; Robert Kennedy; Nelson Mandela; Fidel Castro—and writes about them with the same exceptional candor and insight with which he reveals himself on every page.

As both an artist and an activist, Belafonte has touched the lives of countless men and women. With My Song, he has found yet another way to entertain and inspire us. It is an electrifying memoir from a remarkable man.