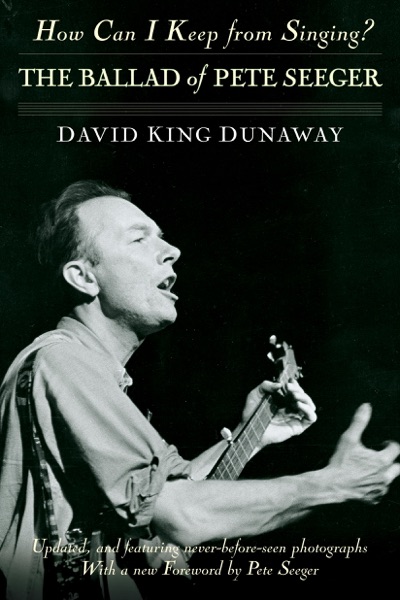 How Can I Keep from Singing? is the compelling story of how the son of a respectable Puritan family became a consummate performer and American rebel. Updated with new research and interviews, unpublished photographs, and thoughtful comments from Pete Seeger himself, this is an inside history of the man Carl Sandburg called “America’s Tuning Fork.” In the only biography on Seeger, David Dunaway parts the curtains on his life.

Who is this rail-thin, eighty-eight-year-old with the five-string banjo, whose performances have touched millions of people for more than seven decades? Bob Dylan called him a saint. Joan Baez said, “We all owe our careers to him.” But Seeger’s considerable musical achievements were overshadowed by political controversy when he became perhaps the most blacklisted performer in American history. He was investigated for sedition, harassed by the FBI and the CIA, picketed, and literally stoned by conservative groups. Still, he sang.
Today, Seeger remains an icon of conscience and culture, and his classic antiwar songs, sung by Bruce Springsteen and millions of others, live again in the movement against foreign wars. His life holds lessons for surviving repressive times and for turning to music to change the world.

“This biography is a beauty. It captures not only the life of the bard but the world of which he sings.”
–Studs Terkel

“A fine and meticulous biography . . . Dunaway has taken [Seeger’s] materials and woven them into a detailed, interesting, and well-written narrative of a most fascinating life.”
–American Music

“An extraordinary tale of an extraordinary man [that] will intrigue not only his legions of followers but everyone interested in one man’s battles and victories.”
–Chicago Sun-Times