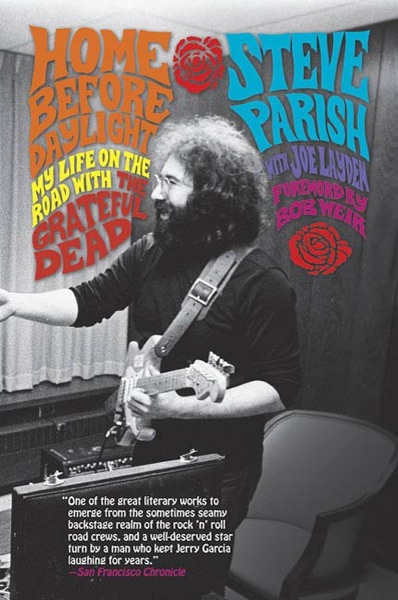 The untold story of life on the road with the Grateful Dead, written by an insider who lived it from the early days to today.

Steve Parish was never one to walk the straight-and-narrow, even during his childhood growing up in Flushing Meadow, Queens. Busted as a teenager for selling acid in the summer of 1968, Parish landed in Riker’s Island. The experience changed him and after getting out he did his best to stay out of trouble, securing a job moving music equipment at the New York State Pavilion. The first show he worked was a Grateful Dead concert in July of 1969 and Parish was captivated by the music. A life seemingly headed nowhere had suddenly found its calling as he fell in quickly with a band of likeminded misfits who formed the nucleus of what would be the greatest road crew in rock ‘n’ roll history.

Parish traveled to California where his apprenticeship began. Working for the band for free and learning his craft, Parish got to know Jerry, Bobby, Phil, Billy and Mickey and through the years their relationships forged an unbreakable bond. He became very close with Garcia in particular, acting as his personal roadie and later manager for his solo performances and Garcia Band shows. He was there during times of trouble (like when a pimp held Garcia hostage at gunpoint in a New York hotel room), spending hours by his bedside when Garcia was in a coma in 1986, and performing the duties of best man at his wedding. He was also the last friend to see Garcia alive.

Throughout the Dead’s historic run, there were parties of biblical proportion and celebrity run-ins with everybody from Bob Dylan to Frank Sinatra–but there was a dark side to life on the road and tragedy didn’t just strike the musicians.

But Home Before Daylight is a story of friendship, of music and redemption. It is a piece of music history, one that reflects the American spirit of adventure and brotherhood. Seen through Steve Parish’s eyes and experiences, The Grateful Dead’s wild ride has never been so revealing.