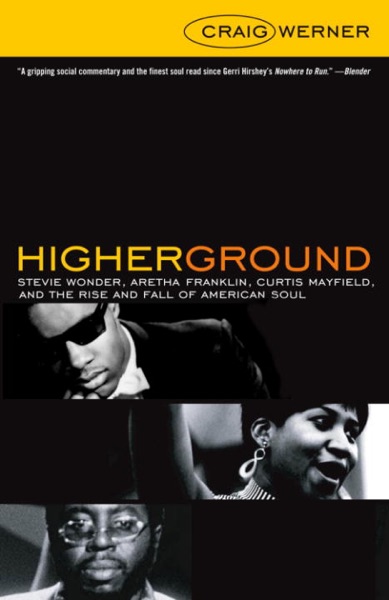 An insightful music writer brilliantly reinterprets the lives of three pop geniuses and the soul revolution they launched.

Soul music is one of America’s greatest cultural achievements, and Stevie Wonder, Aretha Franklin, and Curtis Mayfield are three of its most inspired practitioners. In midcentury America it was soul music—particularly the dazzling stream of recordings made by these three stars—that helped bring the gospel vision of the black church into the mainstream, energizing the era’s social movements and defining a new American gospel where the sacred and the secular met. What made this gospel all the more amazing was that its most influential articulators were the sons and daughters of sharecroppers, storefront preachers, and single parents in the projects, whose genius gave voice to a new vision of American possibility.

Higher Ground seamlessly weaves the specific and intensely personal narratives of Stevie, Aretha, and Curtis’s lives into the historical fabric of their times. The three shared many similarities: They were all children of the great migration and of the black church. But Werner goes further and ties them together with a provocative thesis about American history and culture that compels us to reconsider both the music and the times. And aside from the personalities and the history, he writes beautifully about music itself, the nuts and bolts of its creation and performance, in a way that brings a new awareness and understanding to the most familiar music, forcing you to listen to songs you’ve heard a thousand times with fresh ears. In Higher Ground, Werner illuminates the lives of three unparalleled American artists, reminding us why their music mattered then and still resonates with us today.