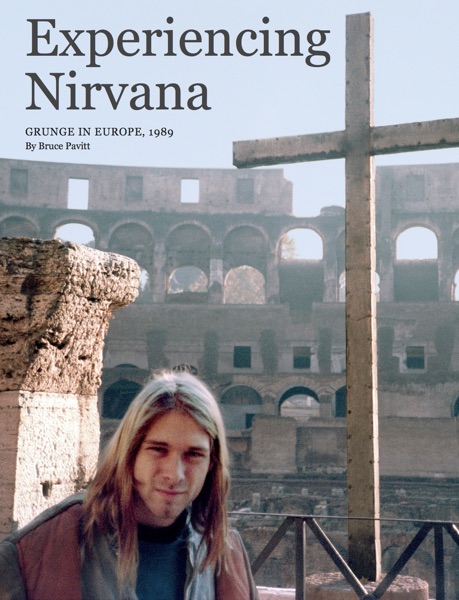 Experiencing Nirvana: Grunge in Europe, 1989, is both a photo journal and a grunge rock microhistory – an inside look into a crucial eight-day period in the touring life of Nirvana, and two other Seattle bands, as seen through the eyes of myself, the founder of Sub Pop, the Seattle label that first signed Nirvana in 1988.

The dramatic eight days covered in this book, from November 27 through December 4, 1989, represent a turning point for Nirvana. In this brief period, the young band goes from breaking up in Rome to winning over the influential music press in London at Sub Pop’s LameFest UK showcase, setting the stage for their imminent popularity.

On November 27, 1989, when my business partner Jon Poneman and I arrived to meet the band in Rome, they were almost finished with a grueling six week tour of Europe. Although determined to promote their grungy, riff-heavy debut album, Bleach, their travels with fellow Sub Pop act Tad had left them exhausted. Providing label support, Jon and I did our best to revive the spirits of a frustrated and downcast Kurt Cobain, who then managed to continue to London where Nirvana played the biggest and most important show of their career to date.

LameFest UK, held at the 2,000-capacity Astoria Theatre, featured three Seattle Sub Pop acts: Nirvana, Tad and popular headliners Mudhoney. Although Nirvana opened the show, their heart-pounding performance won over the crowd as well as the powerful British press, who went on to proclaim that Nirvana was, “Sub Pop’s answer to The Beatles.” It was then that the world’s attention began to focus on the band that would become the biggest rock act of their generation.

A portion of proceeds will go to the Vera Project in Seattle, Washington. Vera is an all-ages volunteer fueled music and arts venue. By engaging participants at all levels of music production and community organizing, Vera strives to fulfill its mission to foster a participatory creative culture through popular music concerts, arts programs, experiential learning and volunteer opportunities for all ages, especially young people.