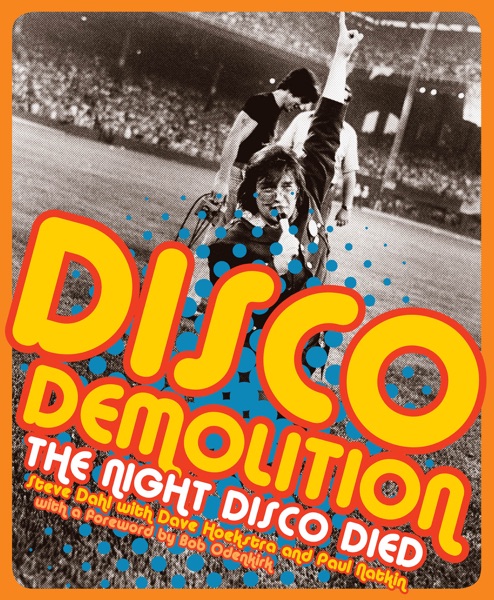 “If you were young and shiftless—and viscerally repulsed by Abba—Steve Dahl was a god. And you were drawn to Disco Demolition.” —ESPN.com.

In the late 1970s, disco dominated radio airwaves, much to the dismay of rock music fans. To boost attendance at Comiskey Park, the White Sox and Chicago DJ legend Steve Dahl collaborated to host Disco Demolition on July 12, 1979. Admission to the park was ninety-eight cents and a disco record. Records were destroyed on the field between games, declaring absolutely how rock fans felt about disco.

Attendance exceeded fifty thousand, far beyond anyone’s estimations, and when fans stormed the field for the demolition, chaos ensued. Police cleared the field, Comiskey Park was evacuated, and the second game was cancelled—for the first time in MLB history. In collaboration with Steve Dahl, Disco Demolition examines the night that changed America’s disco culture forever, featuring a foreword by Bob Odenkirk and over thirty interviews with sports and music icons, including Rick Nielsen of Cheap Trick and KC and the Sunshine Band, conducted by journalist Dave Hoekstra. Also featuring a foreword by actor Bob Odenkirk (Better Call Saul, Breaking Bad) and photographs by Paul Natkin.

Steve Dahl is an American radio personality and former columnist for the Chicago Tribune.
Dave Hoekstra is a former columnist for the Chicago Sun-Times and a longtime radio host for WGN.
Paul Natkin has photographed The Rolling Stones, Keith Richards, Brian Wilson, and many others. He was an official photographer of the Oprah Winfrey Show, and has shot magazine covers for Newsweek, Ebony, Spin, and People.