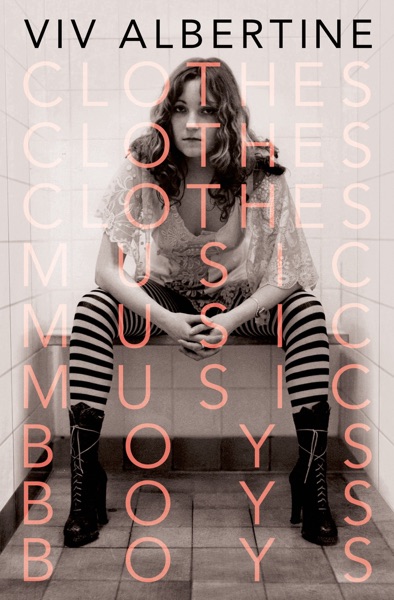 “Ms. Albertine’s book is wiry and cogent and fearless.… Her book has an honest, lo-fi grace. If it were better written, it would be worse.”—Dwight Garner, The New York Times

“Forget Katniss And Tris – Viv Albertine Is Your New Hero.”—MTV.com
The Rough Trade #1 Book of the Year!

Viv Albertine is a pioneer. As lead guitarist and songwriter for the seminal band The Slits, she influenced a future generation of artists including Kurt Cobain and Carrie Brownstein. She formed a band with Sid Vicious and was there the night he met Nancy Spungeon. She tempted Johnny Thunders…toured America with the Clash…dated Mick Jones…and inspired the classic Clash anthem “Train in Vain.” But Albertine was no mere muse. In Clothes, Clothes, Clothes. Music, Music, Music. Boys, Boys, Boys., Albertine delivers a unique and unfiltered look at a traditionally male-dominated scene.

Her story is so much more than a music memoir. Albertine’s narrative is nothing less than a fierce correspondence from a life on the fringes of culture. The author recalls rebelling from conformity and patriarchal society ever since her days as an adolescent girl in the same London suburb of Muswell Hill where the Kinks formed. With brash honesty—and an unforgiving memory—Albertine writes of immersing herself into punk culture among the likes of the Sex Pistols and the Buzzcocks. Of her devastation when the Slits broke up and her reinvention as a director and screenwriter. Or abortion, marriage, motherhood, and surviving cancer. Navigating infidelity and negotiating divorce. And launching her recent comeback as a solo artist with her debut album, The Vermilion Border.

Clothes, Clothes, Clothes. Music, Music, Music. Boys, Boys, Boys. is a raw chronicle of music, fashion, love, sex, feminism, and more that connects the early days of punk to the Riot Grrl movement and beyond. But even more profoundly, Viv Albertine’s remarkable memoir is the story of an empowered woman staying true to herself and making it on her own in the modern world.